Visualizing changes in the physical condition of employees with an app. Promotes DX in health management and helps deter hospital clusters. 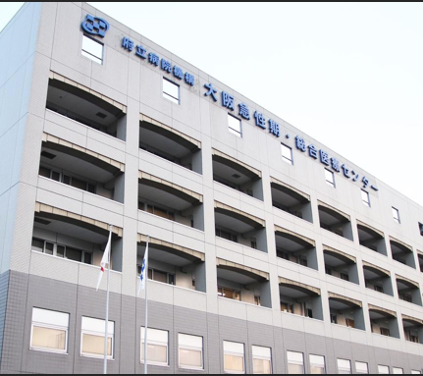 Osaka General Medical Center (Osaka City, Osaka Prefecture) One of the specialized hospitals of the Osaka Prefectural Hospital Organization. It is a comprehensive medical center that provides a wide range of highly specialized medical care, from acute medical care such as emergency medical care and cardiovascular care to cancer care and treatment of intractable diseases, and is a training institution for DMAT (Disaster Medical Assistance Team).

■A single app can be used for everything from emergency calls for 2,000 employees to catching minor changes in physical condition.

It would not be an exaggeration to say that the history of mankind is a history of battles against viral infections. Throughout history, it has been the medical institutions and the healthcare workers who have been at the forefront of the fight against viruses.
The Osaka Medical Center for Acute and Comprehensive Care was established in 1871 as a specialized treatment center for infectious diseases, and has been protecting people's lives and health from infectious diseases for a long time. Today, more than 150 years after its establishment, the hospital provides high-quality medical services as a comprehensive medical center that offers a wide range of highly specialized medical services, from acute care such as emergency medical services and cardiovascular care to cancer care and treatment of intractable diseases.
In order for humanity to overcome the invisible enemy of viruses, it is necessary to take thorough preventive measures, such as setting up a system to detect any signs of the virus as soon as it creeps up. From this perspective, in December 2020, we introduced "respon:sum," a disaster risk management service for medical institutions with a "health information management function," and have been working on preventive measures by centrally managing the body temperature, changes in physical condition, and attendance of approximately 2,000 employees through the application.
The basic functions of respon:sum include a "request to assemble function", a "health management function", and a "bulletin board function" for hospital staff. In the beginning, the Osaka Acute and General Medical Center focused on the functions of "safety confirmation" and "gathering request" in the event of a disaster. Mr. Shoji Tokushige, the chief of the Disaster Countermeasures Office in the General Affairs and Human Resources Group at the center, explains as follows.
"Our center is one of the five specialized hospitals connected to the Osaka Prefectural Hospital Organization. Initially, Osaka Prefecture Hospital Organization had decided to introduce a disaster response system developed and provided by a major security service company, but we were attracted by the fact that Smart119 is a venture company led by a doctor with extensive knowledge of the medical field. We strongly lobbied OIST to introduce respon:sum, a system more suited to medical practice, and this was accepted, leading to the introduction of respon:sum". 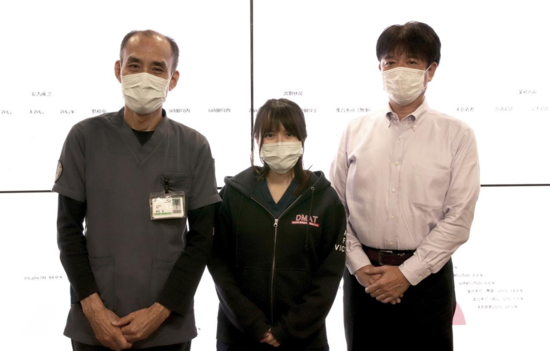 The Osaka Acute and General Hospital is designated as a "base hospital for disaster management," with the mission of supporting medical institutions that protect the lives of local residents in the event of a major disaster such as a major earthquake. Therefore, in preparation for unexpected disasters and situations, the hospital regularly holds disaster medical drills, etc., and the staff has an outstanding awareness of disaster prevention and crisis management. Dr. Satoshi Fujimi, Director of the Emergency Medical Center, said, "In a hospital where people are constantly confronted with life and death, so-called 'emergencies' are the norm. It is only natural that we are highly aware of them because we always take all possible precautions, and we don't consider 'crisis' or 'danger' to be special."
This situation changed drastically when Covid-19 began to spread worldwide. Covid-19 raged far more vigorously than expected, and nosocomial clusters of the new coronavirus broke out in medical institutions all over Japan, and even the Osaka Acute and Comprehensive Medical Center was not spared.
"Even the Osaka Acute and General Hospital was not spared. This was the only time we felt a sense of crisis and frustration, and the hospital became tense." says Dr Fujimi.
The Osaka Acute and General Hospital hurriedly introduced respon:sum and began to use the "Staff Health Management Function" to monitor changes in the physical condition of staff. The "Staff Health Management Function" sends a notification with the URL of a questionnaire form to smartphones and other devices via LINE or e-mail at a fixed time every day, and staff members can select their body temperature, physical condition, and attendance status from the screen and reply with one click. The data entered and replied by the staff is stored on the server and automatically managed centrally. Mr. Tokushige appreciates the high level of convenience of the respon:sum system, saying, "With this function, we have been able to streamline our health management operations by eliminating the need to fill out and submit forms and input data into the PC, which used to be troublesome."
Subsequently, in order to cope with the frequent outbreaks of nosocomial clusters nationwide, the Japanese government decided to preemptively inoculate healthcare workers with the vaccine from mid-February 2021. The Osaka Acute and General Hospital was also going to start vaccinating its staff in early March 2021. In response to this, Osaka Acute and General Medical Center requested an update to add a new post-vaccination item (14-day adverse reaction status) to respon:sum's staff health management function in order to create a more complete and efficient quarantine system.
Mr. Tokushige said, "In the absence of prior information on who might experience adverse reactions to vaccines, we needed to accurately determine whether a staff member's change in physical condition was due to a viral infection or a post-vaccination adverse reaction. If we could not distinguish between the two, we would have to take measures such as examining those who were experiencing physical changes due to adverse reactions. That's why we approached Smart119 and said, 'If possible, we would like you to add a function that can capture minor changes in physical condition and generate data on signs of adverse reactions after vaccination."
Upon receiving the request, the engineers at Smart119 immediately began development. However, there wasn't much time left before the staff of the Osaka Acute and General Medical Center began receiving vaccines in advance.

■Centralized management of adverse reactions after vaccination. It is also highly user-friendly and contributes to the establishment of a more robust quarantine system.

Thanks to the hard work of the engineers, the Post-Vaccination observation agenda was successfully completed before the vaccination, and was updated to respon:sum in March 2021. We are very grateful to Smart119 for their speedy response despite the tight schedule, and we were impressed by their high level of development capability and flexibility," said Dr. Fujimi.
The new "Post-Vaccination observation agenda" feature allows us to track the recent work status of employees and extract candidates for close contacts in the hospital based on detailed body temperature information, as before. By entering body temperature in increments of 0.1°C and symptoms, even the slightest changes in physical condition can be captured, and signs of adverse reactions after vaccination can be grasped at a glance.
"The system is also very convenient because it can track the physical condition of off-duty staff. If the body temperature rises after inoculation, we know that it is due to an adverse reaction, so we don't need to extract and identify people with whom we have close contact. If we hadn't added the function, we would have had to conduct tests on all the staff members who showed elevated body temperature and investigate the close contacts, which would have taken an enormous amount of time and effort," said Fujimi.
Fujimi also says that the usability of the system is "perfect".
"Some doctors and staff who were not familiar with digital devices and applications found it troublesome to use and input data, but once they started using it, they found it easy to operate, and they could see the health status of their staff at a glance on the screen. The system quickly gained popularity and quickly became adopted. Thanks to respon:sum, the members of the Infection Control Office at our center can concentrate on their other work. Now, we can't imagine health management or cluster outbreak prevention measures without respon:sum," says Fujimi.
Perhaps due to the ease of use, the response rate to the respon:sum health management function (daily) has reached 90% of registered users, further increasing the originally high awareness of risk management. Since the addition of the Post-Vaccination observation agenda, no clusters have occurred at the Osaka Acute and General Medical Center, demonstrating respon:sum's ability to prevent clusters from occurring. With these results, Mr. Tokushige smiles and says, "I am now proud of myself for strongly advocating the introduction of respon:sum to OIST".
The Osaka Acute and General Hospital has successfully strengthened its quarantine and disaster prevention systems with respon:sum. The center is still working hard to fulfill its mission as a frontline base for medical care. 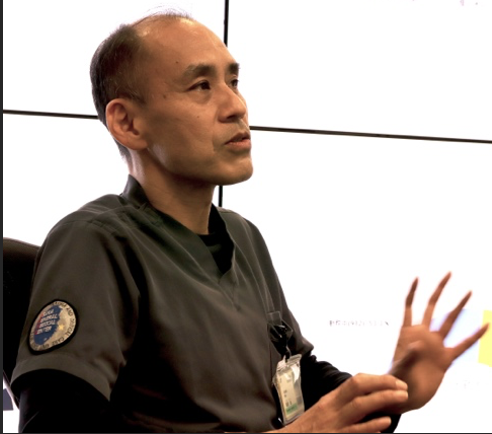 "At first, some people were hesitant about using the system and entering information, but with its simple operation, we can see the health status of our staff at a glance, and the infection control office relies on it for health management and nosocomial cluster control" . (Dr. Fujimi) 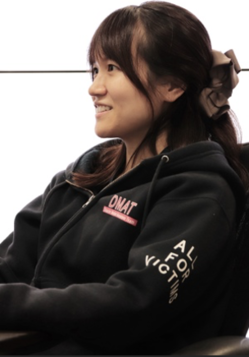 "I was in charge of implementing respon:sum from the standpoint of requesting disaster response. The advantage is that we can centrally manage the health status of our staff. We were also able to monitor the rise in body temperature of candidates for intensive contact who were on standby, and were able to prevent clusters from occurring." (Ms. Uosawa) 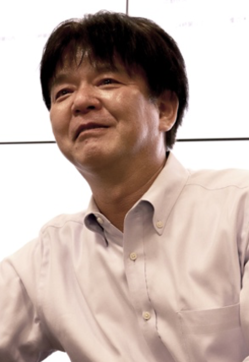 "respon:sum is a system that is tailored to the medical field. Also, when we requested the "addition of a function to capture minor changes in physical condition and generate data on signs of adverse reactions after vaccination", they responded immediately." (Mr. Tokushige)